Recycling is doing well. However, the transition to the Circular Economy must improve. The preconditions for this should be created now. That was the joint message of the National Recycling Congress held on 25 November. State Secretary Van Veldhoven of I&W (infrastructure and water works): " The Netherlands are doing well in the field of Recycling, but we must continue to develop and take steps. Also in the field of knowledge.”

It was the first edition of the National Recycling Congress. The congress that originally was planned on Global Recycling Day (March 18th) had to be postponed due to the outbreak of the corona pandemic. On November 25th it was streamed live from the Fokker Terminal in The Hague. On Wednesday 2, 9 and 16 December the interactive front-runner sessions took place, each focusing on three success stories within the framework of the theme 'Recycling - the Circular Economy in Practice'.

The conference, the organisation of which was in the hands of Lejeune Association Management, was primarily focused on the recycling sector. In March, almost 250 participants had signed up for this, when the event (three days after lockdown) had to be postponed at the last minute. Assuming that in November 25th corona would no longer play a role this new date was set. Closer to the event date, however, in October, the four initiative associations, FNOI (wastepaper), MRF (metal recycling), NRK Recycling (plastics recycling) and VHT (textile recovery), had to decide not to reschedule the congress again, but to convert it into a total online congress. Not only that, but the congress was also offered free of charge to anyone with an interest in and/or interest in circularity, sustainability and recycling. What is going on in the field of recycling of plastic, metal, waste paper and textiles? What is the sector up against and what are the innovations and developments? 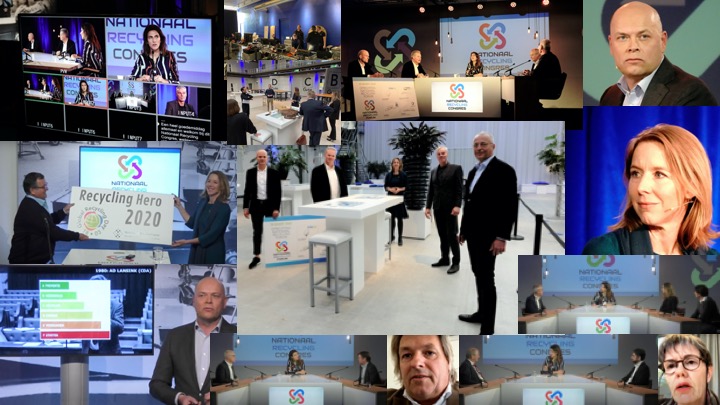 Instead of a one day live session, the programme was cut into four pieces, with three Front runner sessions in addition to the livestream conference, in which the parallel sessions scheduled for 18 March could be attended online and participants had the opportunity to ask questions and take part in discussions.

On 25 November, 325 unique viewers attended the 'plenary' programme of the National Recycling Congress 2020. "A great result, often we notice in the market that an online and free congress has a lot of no-shows. With us, this was not at all the case during the plenary part of the congress. We are very happy with the result: a 95% ‘turnout’' during the live stream, with probably a multiple viewing density as a result of spectators watching along and watching back. And then the front-runner sessions had yet to come". indicated Jules Lejeune.

A conversation with the four initiators of #NRC2020

The congress started punctually at 14.15. After the opening of the plenary part, chair person science journalist and national TV personality Anna Gimbrère had a conversation with the four initiators Ben Kras (NRK Recycling), Gabriël van Seumeren (MRF), Gerard Nijssen (FNOI) and Hans Bon (VHT). It became clear that recycling is doing well, but that more is needed to achieve 100% circularity. The initiators underlined their shared vision 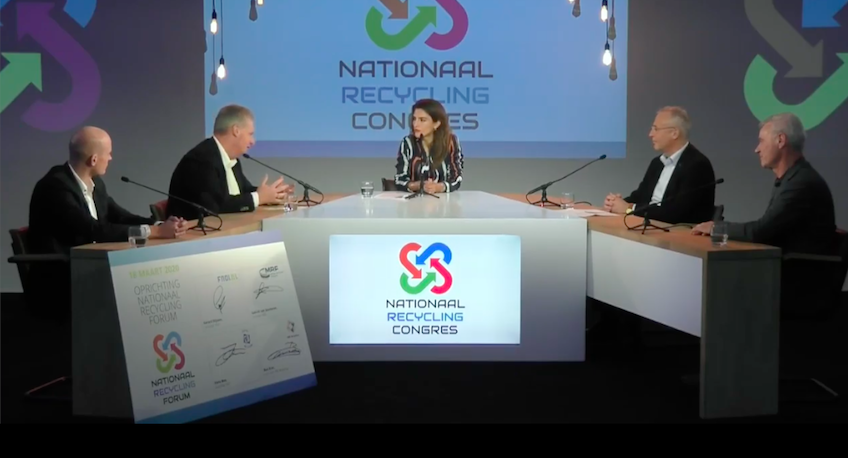 With regard to the incentive of rewards, Gabriël van Seumeren of the Metal Recycling Federation (MRF) acknowledged the deposit concept for cans: 'cans are 100% recyclable. Metal has a positive value because we pay for it. We can achieve 100% recycling of cans with a positive reward in the form of a deposit for cans'.

On the sidekick stage, State Secretary Stientje van Veldhoven of I&W subsequently indicated in her presentation 'On the road to the Netherlands Circular' that The Netherlands is a leader in the field of recycling, 80% of our material is recycled. We must continue to develop and take steps in recycling, but also about invest in knowledge in this field. A good example of this is the first recycling test centre in Europe located in Heerenveen. Testing waste streams in practice. Generating high-quality waste streams in order to achieve a complete circular economy.

Finally, the State Secretary presented the Recycling Heroes Award. This award is an initiative of the VA, Dutch Waste Management Association. The lucky winner was Rien Voets. Every day, this retired teacher goes out with his bicycle trailer to collect waste in the small town of Berlicum, as so-called ZAP-per (ZwerfAfvalPakker, ‘litter catcher’) as it says on his jacket. 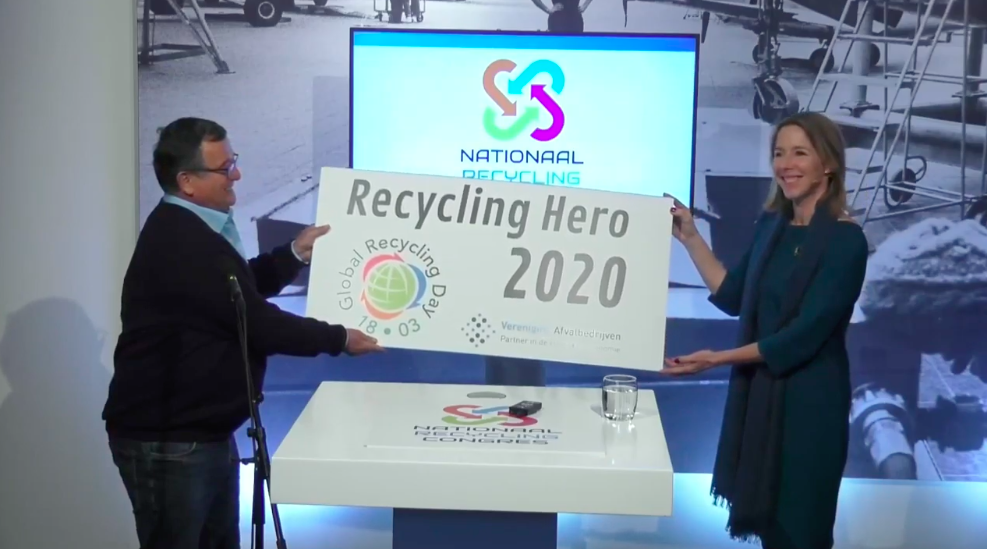 In the subsequent interview rounds, so-called Front Runners in Recycling in the wastepaper, metal, plastics and textile recovery and recycling industries were interviewed about the developments and innovations in their sector. The recorded presentations can be seen on the congress platform. 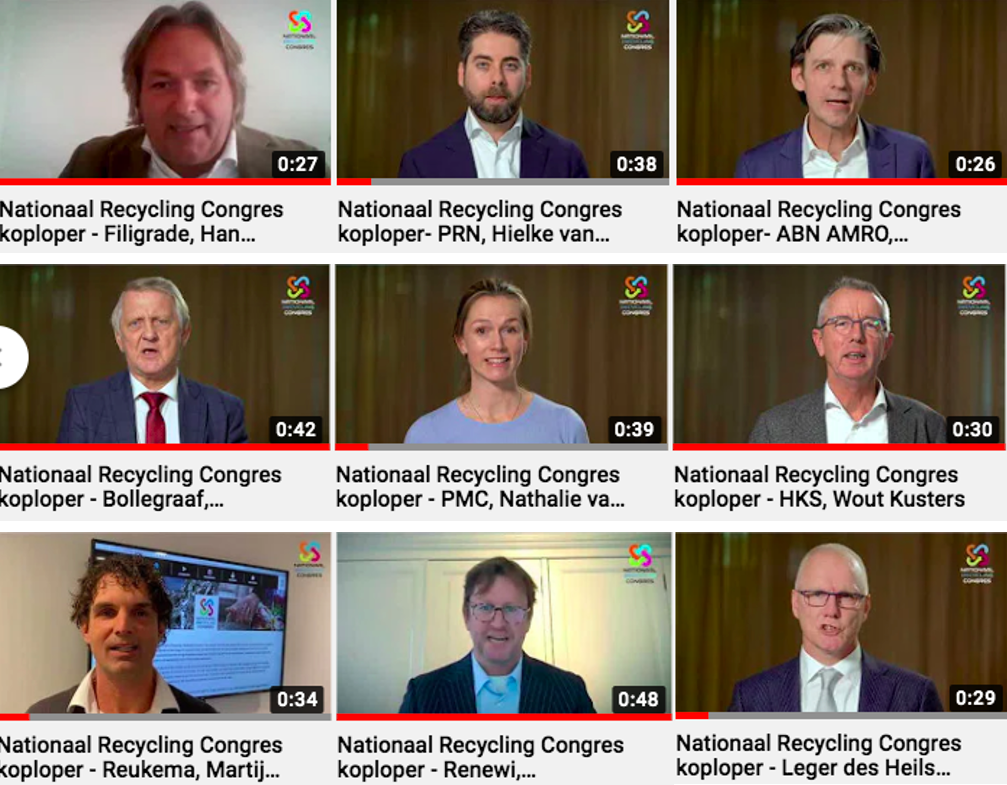 The afternoon ended with journalist and economics columnist Mathijs Bouman. After a lot of technical information, he let the audience into the economy, which is about price incentives, behaviour of people and companies.

During the congress, the term corona had not yet been used. Mathijs, as expected from an economist, mentioned corona. We should not assume that this crisis will automatically produce something for sustainability. In response to the question as to whether political awareness is not there, Bouman said: 'Before the corona era, yes. Because of the corona crisis, it is sinking a little. By the way, it is the first cabinet to have circular economics high on its agenda.

Bouman went on saying that taxing is better than subsidising: 'Subsidies lead to a reduction in prices throughout the market. Price incentives must take place 'at the top of the ladder', i.e. in the design phase when selecting and processing raw materials into new products. A price incentive can be used through a tax on the use of new raw materials or, in recycling terms, 'virgin materials', new raw materials. This price incentive is really necessary, otherwise we are creating market failure. After all, no one has the right of ownership of pollution. You have to pay to pollute'. In his presentation, he refers to the Pigouvian tax; taxes intended to correct an undesirable or inefficient market result. Pollution is often taken as an example. They are price incentives to influence the effects of our behaviour'.

He illustrated a pie chart in which the minimal proportion represented the taxes levied on pollution. Taxing bad behaviour and thus increasing the pie share is the credo, according to Bouman. 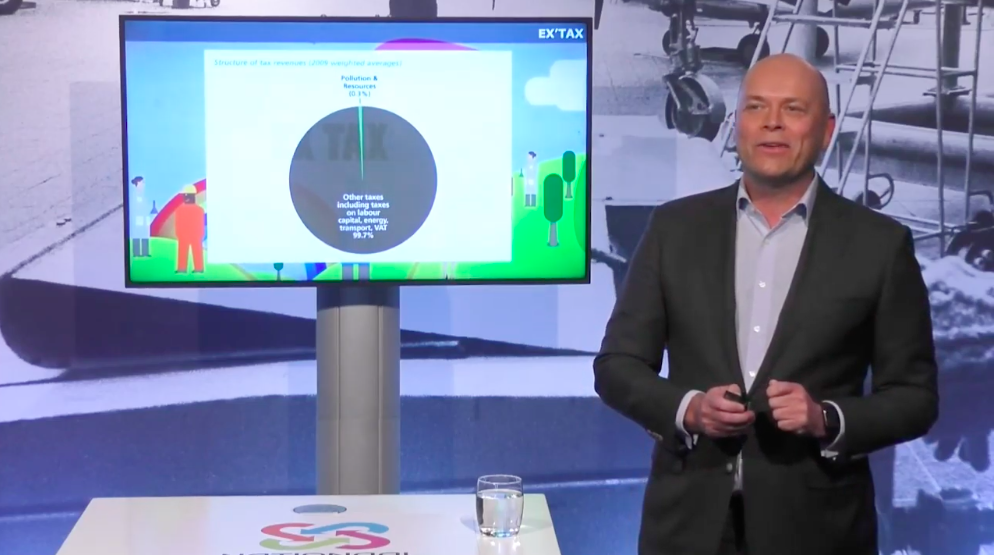 Asked by Anna Gimbrère what more we can do to achieve a 100% circular economy, Bouman said: 'Internationally, we need to move towards border taxes for countries that do not have such a strict policy on the use of recycled materials in new products. This will enable them to make much cheaper products'.

Bouman concluded by saying: 'Incidentally, we should not aim for 100% circularity. Although this has been mentioned a few times today. The targets must be realistic and achievable. You always keep a small percentage that goes into the oven'.

The plenary part of the congress plus the video presentations of the front runners can be viewed on the #NRC2020 platform. You can also read the results of the survey carried out by Recycling Magazine Benelux among its readers.