Evert Smit, Afera President: “Everyone is looking for knowledge in a changing world”

Dr. Evert Smit, 58, is President of Afera, the European Adhesive Tape Association. Since 2015, he has lived with his wife and 2 sons, 17 and 13, in Germany. Who is this change-maker and inspiring leader? We set up an interview to get to know him a little better—personally and professionally—as well as learn about Afera’s partnership with Lejeune Association Management. 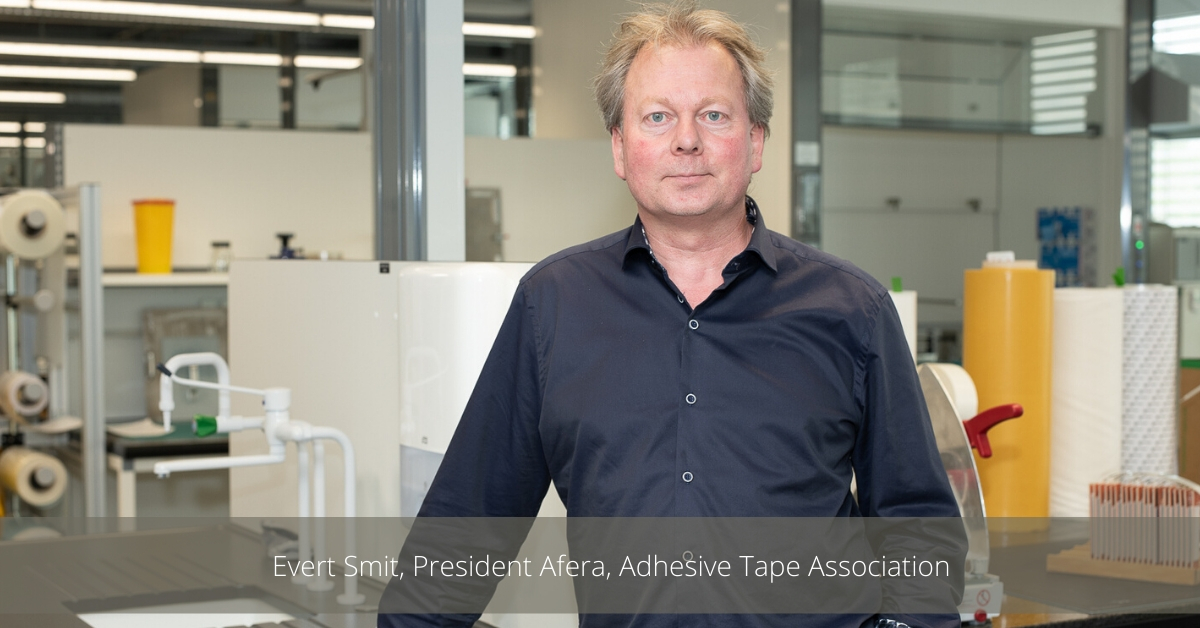 You are Dutch but currently live in Bonn. Why Germany?

In 2015, Lohmann’s Technical Products Business Unit asked me if I wanted to lead R&D in the Company. This meant that we had to move to Germany as a family. The distance did not make commuting possible. When my wife also got a job at Lohmann as regulatory affairs manager, the move was solidified.  Since then, our children have gone to a German secondary school and speak the language fluently.  There are some interesting cultural differences with the Netherlands, but we enjoy living in Germany.

You studied chemistry.  Why did you choose this academic focus?

Actually, it is because of my high school biology teacher. I found biology, as well as biochemistry, very interesting.  The teacher told me I should study chemistry, and I ended up doing that.  I started studying in Groningen (NL).  After an internship at the University of Nijmegen in my third year, I finished my degree in Nijmegen as well (because of love).  After that I was able to secure a position as a PhD student at the University of Twente in Enschede.

How did you become President of Afera?

Since the end of the 90s, I have participated in the Association’s Technical Committee, just occasionally at first but soon I attended every meeting, because I saw the relevance and importance of the Committee’s work.  In 2014, I became chairman of the TC.  Within the Committee, we have made some major changes.  It was previously too much of a “twice a year get-together” to me, consisting of long meetings and not enough commitment, resulting in little activity.

We converted this into an active Committee with Members representing the Industry.  The changes were noticed by all.  Former Afera President Mete Konuralp of tesa then asked me to be his successor.  After consultation within Lohmann, because of the time requirement of the position of President, I said yes. My final appointment in 2018 was then just a formality.

What do you see as an important development for the adhesive tape industry?

Artificial intelligence (AI), also called “machine intelligence”, I see as an important advancement. The future is digital.  People need to get over their reluctance to embrace this trend. Computers are there to help you.  A computer is much more than Microsoft Office!  Nowadays as a company, you really must use better tools, because Excel is not going to get us any further.

People’s brains do not have the capacity and snappiness to understand things in their broadest perspective. A computer can manage this, so let a computer do the work for you—extend your brain with it.  They are not perfect, but they indicate the direction in which you can think.  The solution is probably in that direction.  I firmly believe in this development, and I think we should work more often with this in our Industry as well.  The possibilities are out there, especially now that this type of technology is being accepted more readily as a result of the corona crisis.

The corona crisis:  What is its impact on Afera and its Members?

We had started up some projects, and some are now on hold.  Of course, our priorities currently lie elsewhere.  Keeping each other informed is key in this period.  Whereas we went into an “intelligent” lockdown in mid-March, within which are were mainly focused on, How do I protect my staff and how will my company survive?, we are now entering the phase of realisation that “back to normal” is not going “back to 2019”.

What do we learn from the current crisis and how does this change our society?  Video conferencing is now much more normal. It makes us flexible.  Actually, it turns out that digital interaction has had no negative effect on our productivity.  Developments such as AI and blockchain will be introduced faster in digitisation.  For some companies, it is now painfully clear that they really have some work to do in the field of ICT.

What does the role of Lejeune mean for Afera?

The people working on the Lejeune team are very important to us.  How important that role is has been evident during this corona crisis.  They are the intermediary between all of us.  They bring everything together, they make sure it continues and that it is structured.  They take a lot of work out of my hands as Chairman, as well as that of the Committee Members.  Everything needs to be co-ordinated for us, because if you leave it solely to the Members, it won’t happen, especially now that all companies have other priorities amidst COVID-19 disruption.

I only hear positive signals about the team led by Astrid Lejeune and including Elke Verbaarschot, Stephanie Feith, Bathsheba Fulton, Bert van Loon, and since March of this year, Pablo Englebienne in the role of Regulatory Affairs Manager.

Astrid has been doing this job a long time, and she knows a lot of people.  Even though she is not a chemist, she understands what the pain points are.  She can think along with us—I have a lot of respect for that.  Afera has made a huge leap forward in recent years, and Lejeune has contributed enormously to that.  Everything has been facilitated down to the last detail.  The Meetings are well set up, and we make sure that the right people get together.  Sometimes critical questions are posed by the Lejeune team that cause us to change the way we look at things.

Committee Members are also being chased to ensure that the things we have agreed upon actually happen, and thus we can move forward.  Don’t forget: You are with a group of mostly techies with a different vision of the world.  We are also busy running our businesses, especially now during times of corona disruption.

Lejeune is additionally a very accessible organisation.  I also have a good bond with the managing director, Jules Lejeune, who is also the secretary general of FINAT.  Afera and FINAT want to work more closely.  Jules helps us to bring the associations together by connecting up the right people and addressing special things that our peers just forget about.  Things that you do not get done on your own in addition to your day job.  Without Lejeune we would not be where we are now.

Where do you see Afera in 5 years?

A few months ago, I would have answered this differently from now. The future is unpredictable, but that much will change is certain.  The pandemic is not over yet, so we cannot even predict its consequences a year ahead of us, let alone 5 years from now.  Because, on top of the corona crisis, we have the climate crisis.  In an article in The Correspondent, Rob Wijnberg says, “The climate crisis is a pandemic in slow-motion.” Look what is happening: May is already the driest period of the year.  This is probably why the E.U. is speeding up the introduction of the European Green Deal with the motto, If we are going to change now, we would like to change green as well. This has a really big impact on companies, the Members of Afera (and FINAT)!  It is up to us to make sure that they realise this—that they see the bigger picture.  Communication is key.

A crisis such as this involves an enormous number of participants from several countries in Afera’s interactive webinars, and the number is growing with each session.  Everyone is looking for knowledge in a changing world.  We as Afera must continue to share these changes with our Members. Continuously emphasising that it is important for them to keep up with developments. And Afera acting as a thought leader, sharer of knowledge and binding factor in our Industry.

As a branch organisation, we need to move forward. The world around us is changing at a rapid pace. Furthermore, I also want to keep up the fun! If the corona safety measures allow, drink a beer or glass of wine with each other in the evening after the Conference.  This is important, because we are all human.