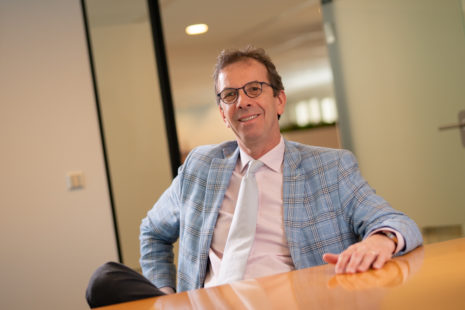 This summer, during 2019, it is exactly 50 years since the infant association FINAT contracted ‘Bureau Le Jeune’, as it was then called, as its permanent office. So, today, FINAT and ‘Lejeune’ have half a century of shared European history, shared memories and shared family heritage.

I have recounted the story of the history of the founding of my dad’s company many times. After he graduated from Tilburg University in The Netherlands, he got a job as ‘cabinet chief’ for Prof. Pieter Blaisse, a Dutch politician in the Catholic People’s Party (KVP) who was one of the pioneers of foreign trade policy and international collaboration. In that capacity, Mr. Blaisse was appointed as a member of the European Parliament (those were the days when there were no European elections), where he subsequently became vice-chairman and chairman of the parliamentary committee for the internal European market (a position he held from 1961-1967).

In those early days, only a few years after the foundation of the European Coal and Steel Community, European politics was a part-time job, and was mainly accomplished from the home base of the appointed officials — in Mr. Blaisse’s case, The Hague — where my dad also settled after he got the job with Mr. Blaisse (and was later joined by my mother after they got married). (photo credit: Wikipedia)

‘You have to organize yourselves’ 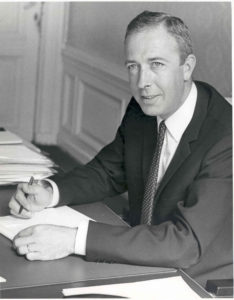 In his first job after graduating from university, Mans Le Jeune (until the end my dad persisted in writing our last name as two words) served as the first point of contact for lobbyists and other stakeholder representatives who were trying to reach out to Mr. Blaisse for appointments on such topics as cross-border trade matters, special interests, and exemptions. The consistent message he delivered to visitors on behalf of his boss was: “You have to organize yourselves”. Mr. Blaisse did not like the prospect of talking to each company individually, as this could lead to a fragmented array of special arrangements, as well as protectionist claims that would go against the free trade principle of comparative advantage.

Like his boss, my dad was a strong believer in European collaboration. After he passed away in 2011, an obituary in a Dutch national newspaper characterized my father as a ‘pioneer against national egoism’. This altruistic, collectivity-focussed mindset determined not only my dad’s career but became a central part of the DNA of the company that he set up in 1964, under the name Bureau Le Jeune, with the tagline ‘Bureau for Business Collaboration’, to help businesses to answer Prof. Blaisse’s command to organize themselves.

One of the company’s first clients was an association engaged in laminated packaging, which brought together the interests of paper, filmic and metallic material manufacturers. At the intersection of these different material types, a growing portfolio of national and European associations developed; and in 1969 a young but growing association called FINAT decided to hire Bureau Le Jeune to manage its daily affairs. Founded in 1958 in Paris, and after ten years of a rotating FINAT office, Mans Le Jeune was appointed as the permanent Secretary-General of the association. 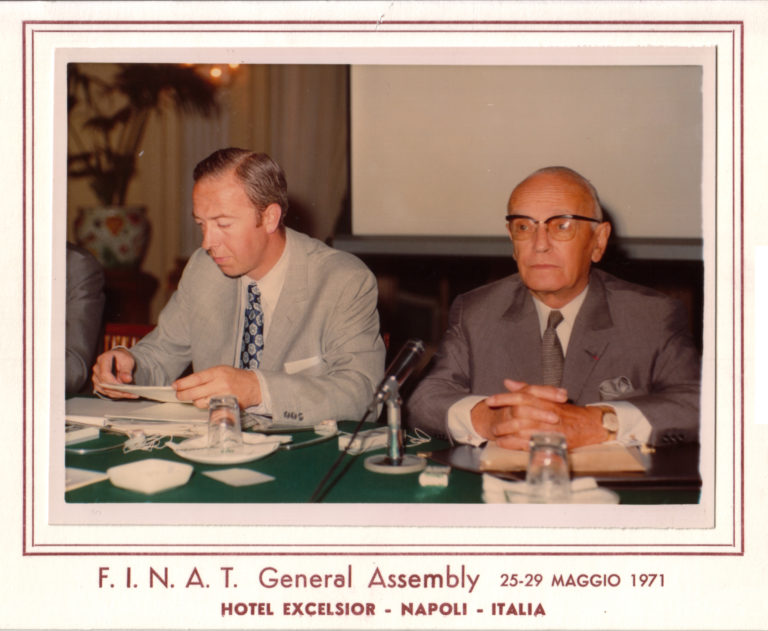 Mans Lejeune next to André Strauss, 1971

In 2008, when FINAT celebrated its 50th birthday, the association’s late founding President André Strauss from France was quoted in the anniversary book ‘United in Labels’, summarizing the origin of the partnership. Mr. Strauss had run the organization since 1958 and was ready to step back. He found a designated successor in Ben Kühne from NSD in The Netherlands, who would take over after the FINAT congress from 20-23 April 1970, at the Kurhaus Hotel in The Hague’s beach resort Scheveningen. Ben recommended Mans Le Jeune, and although the association had no money to hire a professional, Mans took office mid-1969 to organize the congress, and a permanent service contract was concluded as of 1970, when the association first started charging member fees.

From infant industry to a mature network

From a small, emerging industry organization with approximately 30 licensees, FINAT grew into a mature association with almost 400 members spanning (western) Europe and other continents during the mid 1990s, when I first became personally involved. One of the crown jewels in FINAT in the early years were the FINAT Standard Test Methods, developed by the multidisciplinary Technical Committee. Later this was followed by the Marketing and Converter Committees, all of which were committed to supporting the development of this emerging technology; to encourage and reward quality improvements; to exchange market and technology know-how; and to share industry best practices.

But perhaps more important than this, FINAT had established a cross-border network of label industry peers based on mutual trust and friendship, as well as shared values and beliefs in the joint future of this industry. In today’s context this may be hard to imagine, but bear in mind that, in the first 25 years of FINAT’s existence, there was no common European market. There was no single currency. English was not yet the commonly-accepted business language. Eastern Europe was still behind an iron curtain. Travel connections were not as convenient and low-cost as they are today. The Internet wasn’t invented. Mobile phones did not exist. Telecommunications technology was still analogue (remember the ‘collect call’?). Typewriters were still used; copying machines did not exist; and the fax machine only emerged during the 1980s. Looking back, it is perhaps more appropriate, therefore, to speak of cross-barrier than cross-border collaboration!

A metaphor for post-war recovery in Europe

For an association founded under these ‘prehistoric’ circumstances, the importance of establishing profound personal, face-to-face relationships was evident, and the experience of FINAT demonstrates that international business collaboration can be a successful remedy against nationalist political tensions. In that sense FINAT, at industry level, personified Europe’s post-war recovery.

By the time I first became involved in FINAT in the mid-1990s, this recovery had been completed. There had been developments that would have a lasting impact on the future development of FINAT. In 1989 the Wall had fallen, and Germany was reunified; and 15 years later, many of the former eastern bloc countries would join the European Union. The Maastricht Treaty signed in 1992 marked the start of the European internal market, followed ten years later by the introduction of the Euro as the single European currency for the major European economies (the UK excluded). And something called the World Wide Web, also called the internet, had come into play in the early 1990s.

At industry level, the label industry had become well-established in Europe, and national associations had been founded in various countries, bringing in the new dimension of ‘association politics’, which had the effect of slowing down the joint development pace as the national organisations were pushing to turn FINAT into a federation of national organisations rather than an association of companies. It would take until late in the first decade of the new millennium before these tensions subsided and FINAT and the national associations had reached a mutual understanding of their comparative strengths and weaknesses, as well as the complementarity of their areas of competence. 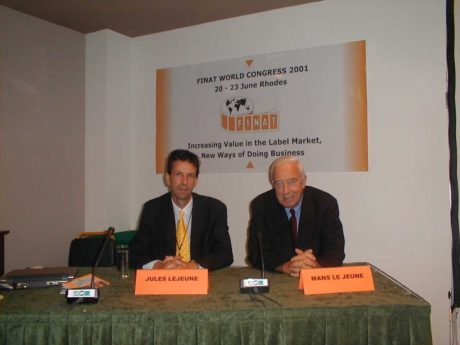 Mans & Jules after the transition, when Mans returned as a guest speaker in 2001.

Against this background, I took over from my father as Secretary-General (a job title now renamed Managing Director) in 1998. His final annual congress took place in Rome in 1997, and my first one was in Istanbul in 1998, followed next year by Prague. FINAT was indeed opening up to the east and, in those days, one of my first trips was to the Poligrafia fair in Poznan, Poland where FINAT held an educational session for the Polish label industry. I also had the honour to be invited to the opening ceremony of the Russian label exhibition Etiketka. My first achievement in FINAT was the development of a FINAT website — nowadays the starting point for any organization, but in those days still a subject of much debate, as it was felt to reduce FINAT’s ‘exclusivity’. 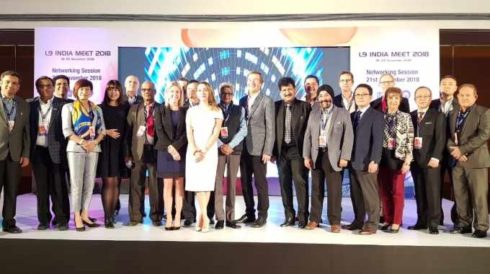 Today, according to the latest head count, the association embraces over 600 member company facilities in over 50 countries. The continuous evolution of data technology and social media has helped FINAT to reduce the distance between the organization and its members, who can now enjoy their ‘member journey’ at the click of a virtual button. Managing geographic and cultural diversity and translating new EU legislation into industry tools and standards has put the association in a leading position — as consortium manager — on matters like sustainability, recycling and food safety; and also globally in the L9 platform, where the ‘big three’ TLMI (US), JFLP (Japan) and FINAT have now been joined by associations in emerging geographical market giants like China (PEIAC) and India (LMAI).

After the age of (UV) flexo, the breakthrough of digital technology during the past 10 years has provided new impetus to the industry’s positioning as decoration and identification solutions provider, and has put the label industry at the forefront of innovation in the packaging industry. FINAT has also engaged itself in facilitating the transition from the babyboom generation who founded this industry in Europe, and whose successors are facing the new reality of doing business in an international business environment.
Our Young Managers Club, founded on the occasion of FINAT’s 50th anniversary in 2008 (now called the Young Professionals Network), has helped future leaders of the industry to develop their network as well as their own leadership competences and skills, and at the same time is providing a talent pool for FINAT. Most recently, FINAT has added ‘workforce development’ to its strategy. The recruitment and retention of young talent has become one of the core challenges for this industry, which is now in competition with the temptations of new emerging high tech industries to students and young professionals.

Our European Label Forum (as FINAT’s annual congress has been called since 2015), has been turned from an annual social gathering of business leaders into a business platform enabling owners and business executives to meet, network, get inspired, learn and engage with peers on topics of strategic business relevance in technology, marketing and management.

Looking back on my own two decades of FINAT engagement, I consider myself privileged to have been given the opportunity to lead this organization into the new millennium. I have thoroughly enjoyed the FINAT journey so far. Being involved in this wonderful organization has taken me around Europe and the world, and has rewarded me with lasting friendships and memories.