Our DNA in the International Association

How will national and international associations relate to each other in the future? For their December 2021 edition, the Dutch magazine for association professionals VM asked this question to Jules Lejeune. He looks at Europe. 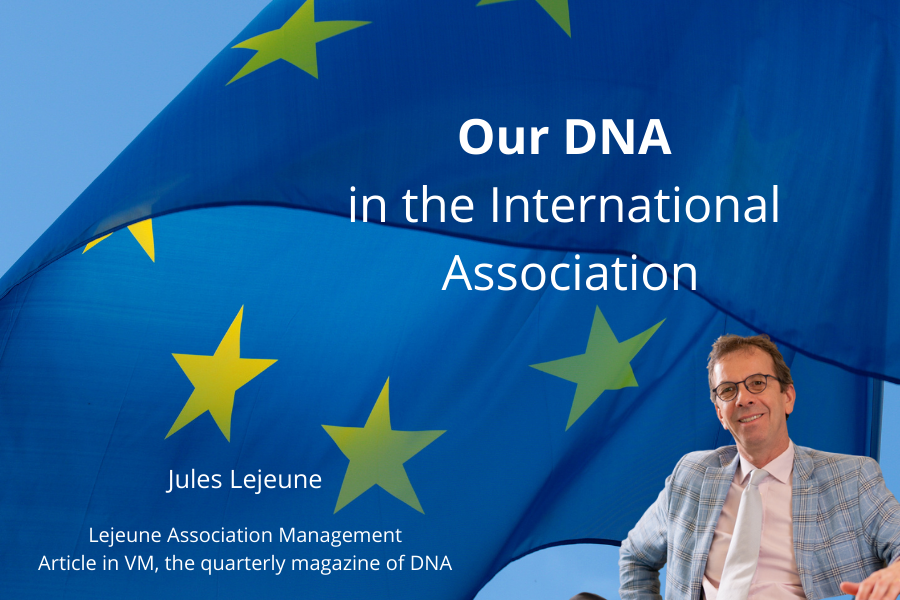 Understanding the future begins with knowledge of the past. The history of my own company coincides with the first years of the European Economic Community (EEC), at the end of the 1950s into the early 1960s. In those years, 'Europe' was still a project strongly driven by ideals. No more war in Europe, with three continental ruffs at one table, and three small Benelux countries as a binding agent in between. And with two neutral places as home base: Brussels and Strasbourg. As a war child and convinced European, my father entered the service after his graduation as a personal assistant to the Catholic’s People’s Party KVP politician and member of parliament Pieter Blaisse. Blaisse was involved in both the establishment of the UN and the drafting of the European Statute, the basis for the creation of the EEC.

"Let them organise themselves"

At that time, the position of a Member of the European Parliament (MEP) was a secondary function that was combined with the membership of the national parliament and was run from the member states. Pieter Blaisse became one of the first Vice-Presidents of the European Parliament and was also Chairman of the Committee on the Internal Market. With the advent of the EEC, the first lobbyists on behalf of exporting companies also turned up at his office in The Hague. "Let them organise themselves first, I won't be able to do my usual work", was the message Blaisse gave his ambitious young assistant. And that is how the latter came up with the idea of professionally guiding industries and sectors through this process.

How it turned out

Almost 65 years after the founding of the EU's predecessor in 1957, much has changed. The EU has grown from six to twenty-eight member states, and has shrunk again slightly again after Brexit. As far as I am concerned, important turning points have been the fall of the Wall in 1989, German unification a year later, the establishment of the internal market in 1992, the introduction of the Euro in 2002, the accession of (mainly) Eastern European member states in 2004 and 2007, the credit crisis in 2008, the debt and Euro crisis in the following years, the refugee crisis since 2015, the Paris Climate Agreement, the Brexit referendum in 2016 and finally (for the time being) the corona crisis in 2020-2021. And, of course, not to forget, the technological changes that have made the world ever flatter in recent decades.

These are all tipping points that have shaped the EU into what it is today, and what is striking is that the word 'crisis' has overshadowed the hopeful and expectant changes of the last 15 years. The ideological vision of the early years has given way to the role of the EU as an inward-looking problem solver and rule breaker. But one that is progressing step by step and serving as an example to the rest of the world. ‘If Europe agrees on something, it must be good'. Think, for example, of the chemical legislation REACH from 2008, which now serves as an example for legislation and regulations elsewhere. But also the European Packaging Directive PPWD. And so on.

The European business community has organised itself, just as one of its founders intended, and now plays an essential role in the realisation of European policy objectives. And it does so as an association based on the European principle of 'unity in diversity'.

And with the current 'tsunami' of European rules and directives, that is just as well. Whereas water brought stakeholders from ‘The Polder’ together, we are currently being inundated with stakeholder consultations and intersectoral consultation structures in the context of the Circular Economy Action Plan and the Green Deal. The Commission itself also has its hands full with keeping to its ambitious deadlines.

European associations: where to go from here?

The above discourse on the evolution of the EU is important to understand the developments at the international (sector) association level. Here, as with national organisations, the increasing scarcity of volunteers and the need to confirm business or professional relevance play a role. But how have European associations and federations adapted to the shifting European perspective over the years? And how does it continue? A few reflections:

1. The association as project office.

European legislation and regulations increasingly demand European solutions at sector level. Whereas European umbrella organisations, in the words of 'guru' Peter Tack, used to concentrate mainly on the 'top' propeller blade ('strategic positioning' of the sector) and left the rest to their national member associations, the propeller blade 'collective organisation' is gaining in importance. An important driving force in this respect are the subjects of sustainability and (design for) recycling, where, in the context of the transition to the circular economy and the Green Deal, there is an urgent need for cross-border coordination of fragmented national initiatives. More and more industry consortia are emerging from under the wings of the European umbrella. With increasing European consolidation, it is important to note that conglomerates prefer to do this through a recognised international association. 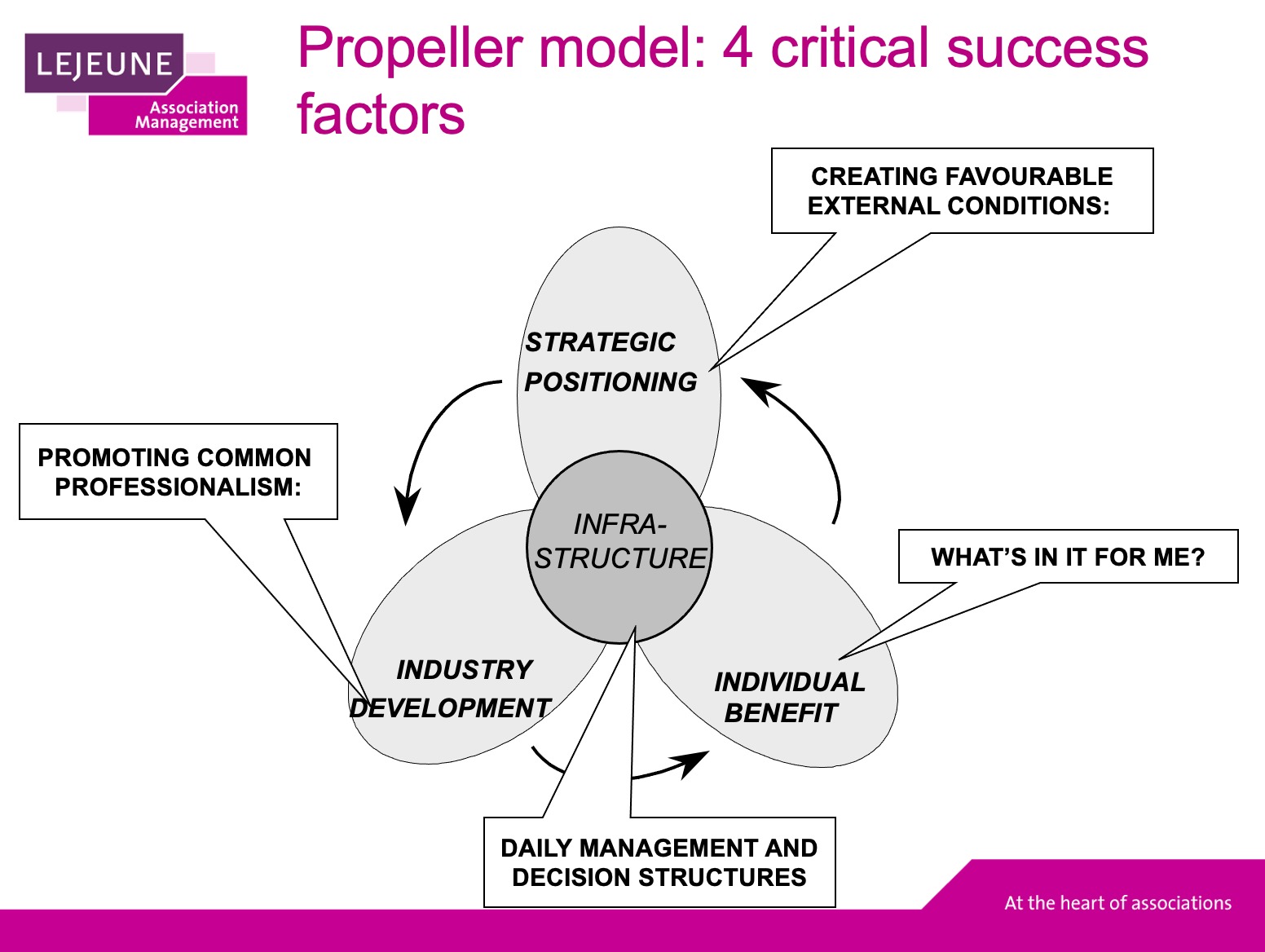 An important factor in the current and future development of European associations is the accelerated digitisation of association activities as a result of the corona pandemic.

3. The association as a cultural asset.

Associations are links between organisations and individuals with like-minded interests, standards and values. In traditional European association life, the images of men in grey suits with national flags in front and headphones on their heads for simultaneous translation may be clear in the minds of many. With 27 nationalities in the EU, this is often still the case at a political level, but ironically enough, after the Brexit, English has now really become the 'lingua franca' in European association land. This promotes decisiveness and purposefulness. After all, with the use of a non-native language there is less room for verbosity and flamboyant language use.

Another example is the gradual convergence of meeting, time, eating and networking habits. Fortunately, this is done while retaining diversity and individuality, and with an ever-increasing eye for inclusiveness.

Towards a digital European polder?

The specific characteristics of international associations are about physical distance, cultural differences, 'understanding' each other (also non-verbally) and finding strength in diversity. Such boundaries are fading because of the developments outlined above. For Dutch association professionals, the road ahead is similar to our proverbial reputation as water managers.

It's in our glass fibres

To illustrate: during the recent German elections, the question was regularly asked how it is possible that the industrial engine of Europe has such poor Internet connections. There is indeed a sharp contrast with our country, which is now overgrown with data centres. We have fibre optic cable to the far corners of our country. A comparison with our medieval polder past comes to mind. The data centres are powered by the windmills of our time. And thanks to cooperative associations of citizens, companies and governments, even remote and sparsely populated regions are connected to the fibre-optic network.

Connecting communities is in our DNA and in our fibreglass. Compared to other countries, the threshold for setting up an association is inversely proportional to our water level. This, together with the fact that we have a strong association culture, that the Netherlands offers neutral ground between the big players, and that our country still has a relatively 'open' image despite the populism of recent years, makes it increasingly popular as a place of business for European organisations. Certainly now that the UK has dropped out and the Netherlands can build the bridge between Brexit and Brussels (especially for Anglo-Saxon organisations that are less EU-oriented).

Our country was at the basis of the largest association in Europe, and is strongly positioned to continue to play an important role in the digitalised future as a facilitator of European networks, projects and as a coordinator of common sector interests.

The downside is that our proverbial directness and flat democracy can get in the way. But a country with a parliament of 150 members and 19 parties (and counting), where even one-man factions are able to split off, should be able to bridge differences on an international scale as well.

Jules Lejeune is Managing Director Lejeune Association Management in The Hague, The Netherlands.

-       This article has been published in the December 2021 edition of VM, the Quarterluy Magazine of DNA (The Dutch Association). The images have changed due to necessary translation into English.